In 1940, author John Steinbeck took a breather from writing fiction—he had just published Grapes of Wrath (1939)—and ventured on a six-week, 4,000-mile expedition down the Pacific Coast of Baja and into and up what is now more commonly called the Gulf of California. Steinbeck and long-time marine biologist friend Ed Ricketts leased the Western Flyer, a 76-foot sardine boat out of Monterey.

The result was a work of non-fiction, The Sea of Cortez (1941)—a 600-page pioneering treatise focusing on the intertidal or shoreline (littoral) ecology of Baja. Steinbeck published The Log from the Sea of Cortez, a more accessible preface to the much larger work, in 1951.

END_OF_DOCUMENT_TOKEN_TO_BE_REPLACED

Below the vast blue mirror of Ventana Bay lives a variety of flora and fauna, what the locals call “silvestre” or the “wild”. At the core of this diverse ecosystem are the rocky coral reefs that dot our beautiful coast line. While our predominantly finger-based coral may not provide as colorful a display as seen in coral colonies throughout the Caribbean, these shallow, rock-based reefs provide a critical habitat for a diverse array of life that have called Ventana Bay “home” long before we did. 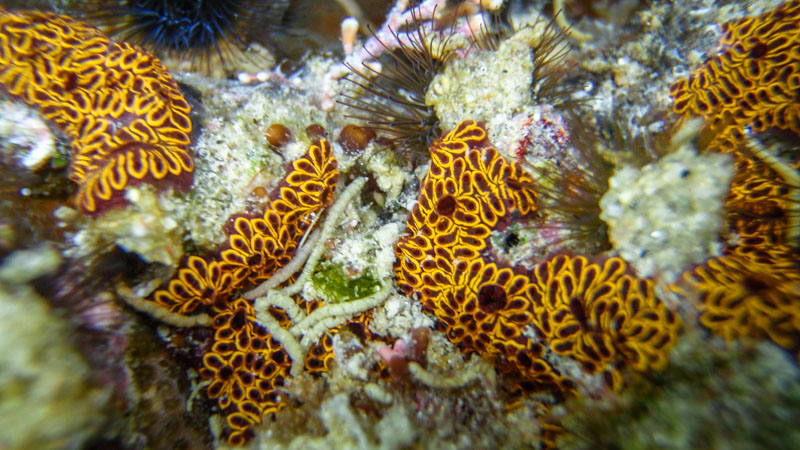 Baby fish or “juveniles” seek protection and sustenance in these shallow reef systems and adult turtles come in for rest and nourishment. Slow-growing coral colonies are nurseries not only to fish, but to crustaceans, star fish, sea urchins, clams, sea anemones and a host of other critters that hold a symbiotic relationship with their living host. Mary Sim, a local snorkeler living in the area since 1987 and a full-time since resident 1998, recalls in one snorkel session, “logging over 95 varieties of fish on one reef.” END_OF_DOCUMENT_TOKEN_TO_BE_REPLACED

Jesuit Padre Joseph Maxiáno Rotheax gazed in surprise and wonder at the ceiling and back wall of the underside of the huge cliff. Staring back at him were a series of life-sized or larger than life-sized human figures standing with arms outstretched, feet wide apart. They were virtually neckless. The heads of many were decorated with several forms of headdress. Most of the figures were neatly split down the middle—one side painted in reddish pigment; the other in black. Some were depicted as having been shot with one or more arrows.

END_OF_DOCUMENT_TOKEN_TO_BE_REPLACED

Fact checking has become a major industry. The focus is primarily political as legions of fact-checkers try to ascertain the “truthiness” of politicians’ pronouncements. But, other “facts” need checking, too.

In my recent article The Eiffel Chimney & Mining Museum of El Triunfo, I parroted the common wisdom that French engineer Gustave Eiffel—he of Eiffel Tower fame—designed El Triunfo’s iconic 10-story high chimney, built in 1890. But, despite numerous citations to that effect on-line, the reality is that Eiffel’s involvement in the design of the chimney is questionable.

END_OF_DOCUMENT_TOKEN_TO_BE_REPLACED

In Part 1 (see Part 1 here),  Cortés landed on Cerralvo, and named the island Santiago. Vizcaino tried to found a settlement here. Now, a century later, we meet Francisco de Ortega who visited our bay three times. Evidence suggests he landed here, befriended the Indians, and reported on their customs. An ingenious and politically astute person, he carried a new machine to aid in the search for pearls. Ortega and crew were marooned when their ship broke to pieces on the rocks north of Punta Gorda.

Kcuhc and Ykceb left camp at dawn. They had work to do on a trail to Cerro del Puerto (Pericú sacred mountain west of El Sargento). They hiked up a narrow arroyo past red-billed colibrís  (hummingbirds) feeding on the blossoms of a plant hanging from the arroyo’s south wall. On the opposite side, abejas (bees) worked on honeycomb inside a rock alcove.

END_OF_DOCUMENT_TOKEN_TO_BE_REPLACED

Update: despite numerous citations to that effect on-line, the reality is that Eiffel’s involvement in the design of the chimney is questionable. Read here an updated “fact-check” of this article – Lorin.

Here’s a trivia question that’s likely to stump all players: What do the most famous landmark in Paris, the Statue of Liberty and the 115-foot high smelting chimney looming over El Triunfo have in common? The answer—Gustav Eiffel, the famed 19th architect and civil engineer whose best-known creation is his tower in Paris. It’s not widely known, however, that Eiffel had a world-wide reputation and designed structures all over the globe. END_OF_DOCUMENT_TOKEN_TO_BE_REPLACED

Time: 10,000 years BCE.     Location:  The bluffs above the shores of present day La Ventana and El Sargento.     Sea Level: 300 feet lower than the present.     At dawn’s first light, the men followed a  well-worn path east through grasslands to fish and gather sea food from the shore.  They arrived at sunrise, and two youths floated rafts a short distance to the island to hunt for seals and turtles.  The women finished gathering the last of the acorns from the live oak woodland where they had camped for the past moon.  While they crushed them between metate and mano, they discussed moving camp  to the base of the mountains where  pitahaya were ready to harvest. END_OF_DOCUMENT_TOKEN_TO_BE_REPLACED

La Ventana Stories, an ongoing series of write-ups, started in December 2018, about the history and the happenings of La Ventana Bay and the surrounding region. Contributed by seasonally resident authors, look for a new story every few weeks during the windy season.