Señor José María Lucero Romero lived in San Blas, a settlement near Vinorama. He met Doña Sostenes in the ordinary course of events between mountain ranchos and proposed to her parents that he and their daughter marry, which they did. Doña Sostenes was 15 years old, Don José 50.

Señora Sostenes made trastes, kitchenware, such as ollas y cazuelas, pots and casseroles. Some of the waterpots she made, called tinajas, were so big that an adult could stand inside one. She dug clay from the side of an arroyo, mixed it with water, removed small stones and debris, and added donkey dung to make the final product more resistant to cracking. She rolled the clay into long cylinders, placed one on top of the other to form the shape she wanted, then blended them together with smooth stones. While the pottery was drying, José María collected firewood and put it into a depression in the ground, placed the pots on top, and covered them with more branches that he set afire to make the trastes durable and waterproof. Don José sold or traded the earthenware in La Paz and nearby ranchos. 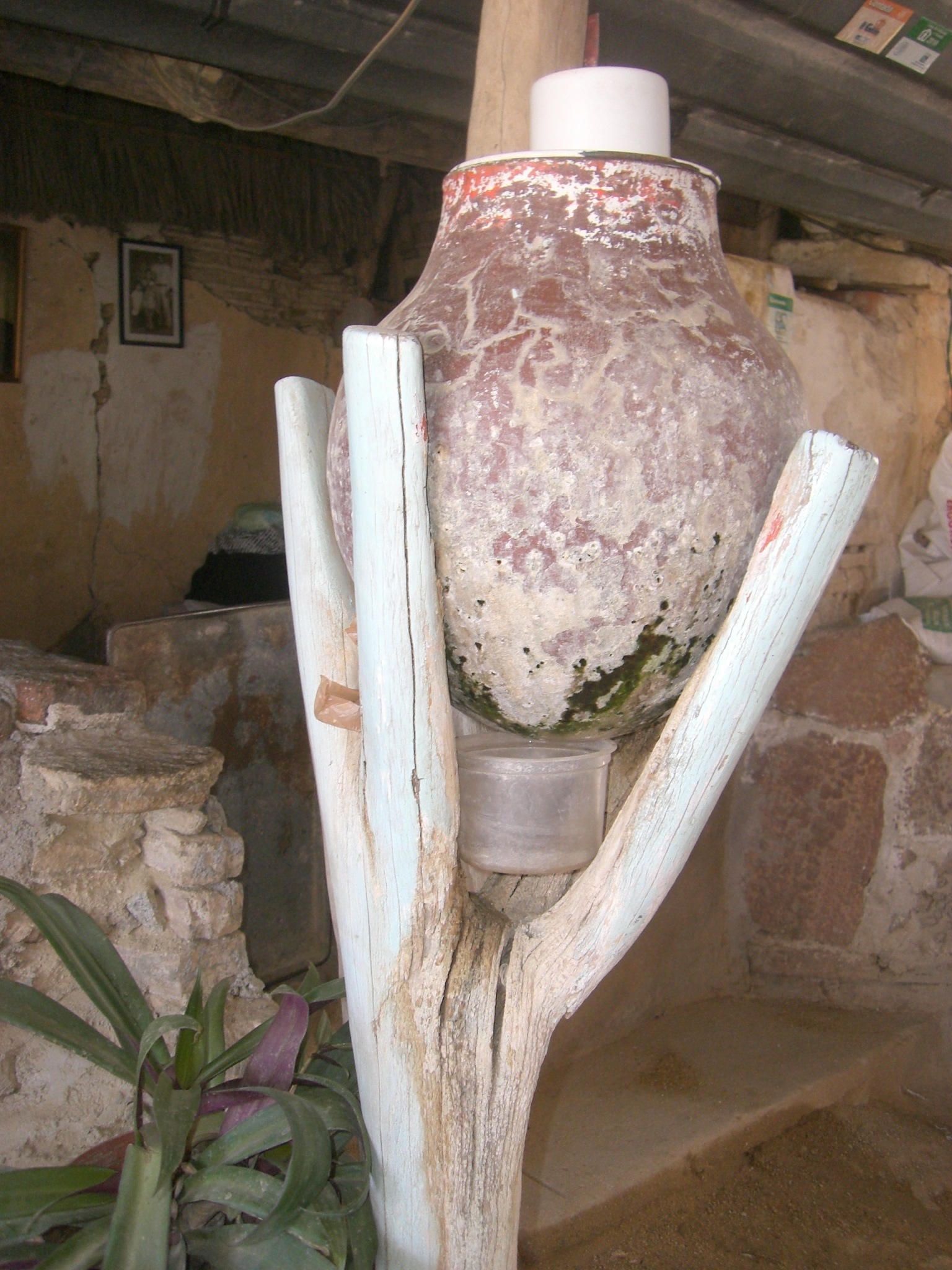 Pot made by Dona Sostenes that is still used at Rancho Tejones to cool water.

Every few weeks, Sr. José María took his wife’s kitchenware to La Paz by burro with some of his children. The trail to the city took several days to traverse. At night, they stopped where they could find water and built a campfire to scare off wild animals. By the time they got to La Paz, they were tired but excited by the sights and sounds of the city. After José María had sold everything and bought the supplies they needed, they loaded up the burros and struck out for home.

Don José had a primo, cousin, Pedro Lucero, who lived in El Sargento on the shore of the Sea of Cortéz twenty miles northeast of San Blas. One day he took his older sons and hiked across the mountains to visit him.  The boys ran on the sandy beaches and played in the refreshing waves. Pedro Lucero invited Don José to try his luck in this new village, and his sons begged their father to say yes. After returning to San Blas and talking with his wife, the couple decided to move.  Life in San Blas had not been easy, so the family hoped that this would lead to a better experience. Early in 1942, a friend with a car helped them pack up their few belongings and brought Doña Sostenes and the younger children to their new home. Don José and the older sons followed with the burros.

Our poverty stood out because there were thirteen of us. We collected firewood and traded it for food. We lived on what we could catch, shoot, or gather: fish, sea turtles, goats, mountain lions, lizards, and wild fruit. We even used raccoon in tamales. My mother found a vein of clay in an arroyo and started making kitchenware again. My father traded it for vegetables in Los Planes.

Slowly, we became established in the community. As we grew older, we began to enjoy music and dancing, so we went to Los Planes on weekends to dance to the tunes of a group called the Osuna.  It took us three hours to walk there; we returned home during the dead of night.

Señor José Maria died at the age of 104. His children remember the many times they shared good memories with him. He led an exemplary life, and they always showed him respect and admiration.

Not everyone who fished the Bay of La Ventana lived in one of its villages. Don Severiano Castillo lived twenty miles to the west in the Sierra de Los Divisaderos with Doña Jacoba Flores. They had no livestock; they were the poorest of the poor and had nothing on their homestead to sell or trade for food. So Don Severiano used to walk with his burro across the mountains to the seashore where he kept a small canoe. He’d fish until his catch was sufficient to take back across the mountains and trade with his neighbors for coffee, cheese, and meat.

Don Severiano fished with pólvora, gun powder, to stun large numbers of fish and collect the ones that floated to the surface. One time he was alone in his canoe when he saw a school of sardines roiling a patch of water. He lit the wick of a home-made explosive, but while he was looking for the patch again, it blew up in his hand. Severiano lived to tell his story, but he lost an arm.

Fishing in El Sargento was not always as excellent as Juan Aviles had promised Pedro Lucero when Juan invited Pedro to come and make his home there. Hunger was still lurking nearby, and when it appeared, even the youngsters knew its rumbling in their stomachs. Doña Gabriela Amador León, a granddaughter of La Ventana founder Salomé León, describes those times when she was a young girl [1].

If we were short on food, and the men had gone to the island to fish, I’d put a wick in a small jar of mayonnaise and leave it on the sand where I launched my canoe in the late afternoon to fish most of the night. I’d usually pull my boat ashore by 3 o’clock the following morning and light the mayonnaise lamp so I could clean what I caught. [Yes, put a wick in mayonnaise and it burns!]

My friends and I also kept an eye out for fresh turtle carcasses left on the beach. There were lots of loggerheads in those times, and the fishermen who caught them took only the breast and left the rest for shorebirds. If we found a carcass, we scooped out the fat, put it in a frying pan, and walked up an arroyo to look for talayote, a rambling vine with pods like green beans that have seeds inside. After we had picked and shelled them, we built a campfire and cooked the seeds in loggerhead fat. If someone had brought along pork rinds, we tossed those in too. We gathered and ate a lot of wild fruit from bushes, cactus, and trees. We ground corn on a metate and made fresh tortillas. We also made flour tortillas using loggerhead oil in place of lard. Sometimes the only thing we had for dinner was chopped dates wrapped in warm tortillas. Since there was a shortage of food in those times, everything tasted good.

In 1973, Marcela Gonzales[2] graduated from the Urban Normal School in La Paz.  She was given a choice for her first rural teaching assignment: the large primary school in the dusty agricultural center of Los Planes or the two-room primary school in El Sargento, the fishing village overlooking the Sea of Cortéz. The school in El Sargento had difficulty retaining teachers because of its remoteness and lack of modern housing. From La Paz, it was a four-hour commute over a dangerous unpaved mountain road to the village, which had no electricity, running water or medical facilities.

El Sargento’s oceanside location, and the challenge the job offered appealed to Marcela. The school had six grades but only two other teachers, one of them, the principal. Marcela was assigned the first and second grades, teaching one in the morning and the other in the afternoon. Don Luis and Mila Lucero, parents of two schoolchildren, invited her to live with them. Their daughter had completed elementary school, and their son was starting third grade.

Marcela found her job challenging, but by December, her students were reading stories at home to their parents. The people of the village provided her whatever support they could. But there was one problem the teachers were not sure how to handle. Several young boys, some who had never finished primary school, were working as fishermen with their fathers. Unfortunately, they also shared in the pleasures of smoking and intoxicating drinks, especially if strong winds prevented them from working on the weekend.

One day the two teachers talked with the director of the school about this problem. They all agreed that Raymundo, the owner of the village’s only market at the time, was probably at fault. They suspected he was giving cerveza, beer, to underage boys and docking their father’s wages; he didn’t even have a permit to sell beer to the men. After the fishermen sold their catch to Raymundo, he deducted a fee from their earnings for the use of his pangas and the bottles of beer they had taken on credit. That didn’t leave much money for the women to buy food and other necessities. The director reported the problem to the authorities in La Paz; Raymundo was fined and not allowed to sell beer. For several years, the men had to go to Los Planes if they wanted to buy cerveza.

Near the end of Marcela’s three-year stay in El Sargento, the village was no longer as isolated and primitive as when she arrived. A graded dirt road connected El Sargento to La Ventana and went on to Los Planes.  Power lines brought electricity to the village, and a pipeline from Los Planes provided running water. The fishermen were talking about organizing themselves as a cooperative to get better prices for their catch and to buy their own pangas and motors. They were beginning to build houses with better materials, and some had their own cars or pickups. Students who graduated from elementary school were going on to study at the Los Planes secondary school.  El Sargento was a town that had broadened its horizons and entered the twentieth century.

2. Ibid (2005) Story adapted from the source cited, the teacher’s name has been changed.