Ocean beaches the world over change with the seasons and long-term weather events. La Ventana Bay beaches have these same dynamics but with less wave action. Beach sand comes and goes and is related to weather events and currents. Around La Ventana Bay, there will be years of no sand, and in other years there will be a significant amount of sand on the beaches. People who have spent their lives in La Ventana can testify to these decade-long changes. They might recall that 20 years ago, a beach had mostly rock boulders and just a small amount of sand near the bluff base. But they also remember when they first came here around 1987, the same beach was twice as wide as it is now. But no data was written down by anyone involving dates, amounts, etc.

END_OF_DOCUMENT_TOKEN_TO_BE_REPLACED

Salomé’s caravan made its way over the dusty trail from La Paz to the palm grove on the Bahia de La Ventana, stopping to camp one night in the mountains. Salomé later commented that he was so weary by the journey’s end that even the hat on his head was too much weight to bear.

Salomé and his sons scoured the surrounding desert for palo de arco and downed cardón trunks to build a shelter. They chose a construction site under a stand of palm trees on the north side of the palmar overlooking the bay and Isla Cerralvo. They used the cardón for the corner posts and roof beams, wove the palo-de-arco walls and plastered them with mud. Then they attached layers of palm fronds to the roof and left the dirt floor bare. This type of shelter, called a  jacal, was standard in many rural communities of Mexico in those times.

END_OF_DOCUMENT_TOKEN_TO_BE_REPLACED

For a century and a half, pearl divers repeatedly overfished and abandoned the pearl grounds along the east coast of Baja California. The pearl beds replenished themselves in a few decades before being overfished again. In 1697, when Charles the II learned that license holders spent more time gathering pearls than mapping and searching for settlement sites as the permit required, he rescinded those licenses. When the Jesuits took over administering economic activity on the peninsula, they prohibited pearl collecting for mission workers; others could get permission as long as they paid the Spanish Crown his quinto de perlas, one-fifth of the pearls they found. The Jesuits also suggested payment for themselves of one-tenth.

A century after Spain expelled the Jesuits from Baja, the pearling industry in La Paz took off. Armadores (fishing fleet owners) hired mostly Yaqui Indians from Sonora to dive for pearls. Some Yaqui Indians could dive to 20 fathoms, 120 feet, equipped only with a loincloth, knife, and catch-bag. But deaths from a variety of hazards were high.

END_OF_DOCUMENT_TOKEN_TO_BE_REPLACED

Time: 5,000 years ago. Location: Bufadora and Choco Lake area of present-day Bay of La Ventana. At dawn’s first light, the men started searching for shellfish in the shallows along the shore in front of the shell-midden dunes left by their ancestors. The women finished gathering acorns from the woodland where they had camped for the past moon.  While they prepared the oak seeds for soaking to remove their bitter taste, they discussed moving camp to the base of the mountains where pitaya was ready to harvest.

END_OF_DOCUMENT_TOKEN_TO_BE_REPLACED

The Baja Peninsula is the third-longest globally, stretching 747 miles from the border at Tijuana to Land’s End at Cabo San Lucas. Drive the Transpeninsular Highway though and you will log closer to 1061 miles.[1] The new road, completed in 1973, created a demand for cheap labor in tourism and agriculture. People from the mainland came to La Paz seeking better-paying jobs and a safe place to live. But many could only afford to put up tar paper shacks on the banks and dry streambeds of arroyos on the southwest edge of town.

Earlier settlers had built homes on a web of north-south running arroyos in La Paz that were sometimes dry for several years at a time. These arroyos secos were eventually filled in, paved over, and served as the main streets of the central downtown area. During a downpour, they often flood.

In 1973, engineers built an earth-and-rock levee along El Cajoncito, the big arroyo between the city and the mountains to the south. The levee gave the migrants who had constructed shelters below it an illusion of safety.

END_OF_DOCUMENT_TOKEN_TO_BE_REPLACED

We asked our readers a few questions to help get a sense of what everyone is thinking about this unusual season. With 356 respondents, here are the results!

END_OF_DOCUMENT_TOKEN_TO_BE_REPLACED 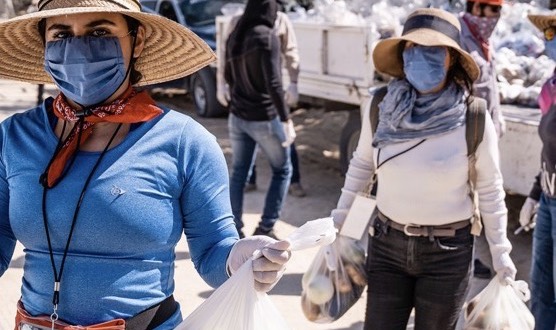 Are you looking for a way to help local community during the COVID-19 crisis? We are pleased to help promote an opportunity to donate and volunteer with an organization providing direct support to the La Ventana / El Sargento community.

END_OF_DOCUMENT_TOKEN_TO_BE_REPLACED

The mountain range just south of San Juan de Los Planes is called the Sierra la Gata. A century ago, there was a narrow trail that went over the mountains and connected Los Planes to Boca de Alamo, a tiny fishing village on the Sea of Cortez. (Today that trail is a narrow road, often with washouts that make it impassable by auto.) Manuel Avilés Geraldo traveled by burro over the trail from Los Planes to trade or sell cheese and vegetables to the residents of Boca de Alamo and La Reforma, the beautiful hacienda three miles west of Boca de Alamo near some impressive ancient rock art. At La Reforma, he met Señorita Adelia Lucero. Señor Avilés sometimes paddled a canoe across the Bahía de Los Muertos and walked up to La Reforma to court her. After they married, he brought his wife and mother-in-law to the home he had built in Los Planes [1], a Mexican shack called a jacal that had a palm-thatch roof, mud-plastered palo-de-arco walls, and dirt floor. Señor Avilés cared for cattle at Punta Perico and toiled in the mines at Las Canoas to support a growing family. Guillermo Avilés Lucero, the youngest of the family’s five siblings, was born in July 1947—a month after his father had died.[2]

END_OF_DOCUMENT_TOKEN_TO_BE_REPLACED

The pueblo of El Sargento in Baja California Sur overlooks the Bay of La Ventana and Isla Cerralvo, the rugged, uninhabited island seven miles offshore. In 1998, the quiet fishing village had a population of around 800.[i] A dozen foreigners had built homes close to the beach below the washboard road going north from town. They bought their groceries from Armida at the one-room market in her mother’s house across from the church plaza.  You could have a delicious Mexican meal at Tacos Leon for as little as two dollars. The place was so popular, people often had to wait outside for the “second sitting.”

Ten concrete-block homes lined the narrow dirt road that winds through the pueblo. Mexican families enjoyed sitting outdoors on their verandas, eating dinner, visiting with neighbors, and watching children play in the street. When the newcomers drove by, out of common courtesy they slowed to a crawl to avoid causing an injury or leaving residents choking on clouds of dust. A few recent visitors, however, seem to be in such a big hurry that they forget they are guests in another country. They careen through the zigzag as though competing in the Baja 1000. They must be going someplace more important than respect for La Gente, the Mexican people who live and work here.

The campground at the pueblo’s sister village 5 km to the south, La Ventana, was a winter haven for a few hundred windsurfers. That was about to change. La Ventana’s first kiteboarder hit the water in 1998 with a two-line kite and a broken seven-foot surfboard he had glued back together. The combination was a sight foreign to most people that day, but it changed the bay forever. That was my son, Bruce. Soon there would be more kites in the sky than sails on the water.

The two villages provided only essential services for visitors. If you needed gas for a trip to La Paz to fill up, go shopping, or check email at an internet cafe, you stopped by Juan Ramon’s hardware. Juan or Alejandro Rieke pumped a few gallons of gasoline from a barrel to get you there. And if you spoke some Spanish, they had some interesting stories to share.